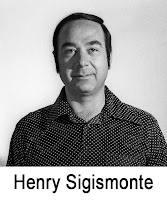 Beauty is, certainly, in the eyes (or ears) of the beholder but in music it is the responsibility the listener to keep our vision as clear as possible; it's tragic if a bad day or a bad road trip can changes our perceptions to the degree of missing greatness.

Henry, Bravissimo.
republished January 21, 2022, in Oaxaca, Mexico
This blog is being republished as a prerequisite for a new blog. COMPARISONS
to be published in the next days .
Posted by Roger Bobo at 11:08